Skip to content
Part 1 of 4
NOTE: If you are here to look for answers kung totoo ba ang JULY 1, 2018 SALARY INCREASE, click this link.

My social media account was abuzz recently. It’s the Pages and Groups related to police and military actually. And No, the discussions were not about anything related to Marawi or the Drug war. It has nothing to do with the enemies of the state or the criminals either. Rather, it was something more about the uniformed agencies’ internal issue. Big issue.

What is it? Yeah, you may have guessed it right. SALARY INCREASE. How big you say? Big issue. Indeed. Heck! Even that Facebook page of military and police wives and girlfriends, whose posts are all about stories of infidelity and third parties, is talking about it. Especially them, mind you.

Anyway, ever since I broke the news that the PNP, DND personnel will not receive a 100% percent increase (or doubled) on their salary a few weeks ago, I have been mulling for quite some time about creating a simple analysis of the proposed increase endorsed by Budget Department of the Duterte administration, and comparing that with the allowances provided for under E.O. 201 series of 2016. Also, later on, I will provide my honest to goodness insight of the issue at hand, taking into considerations of the welfare of the service personnel.

Please do take some caveat though, as this opinion is not political in nature, but rather it is police-centric, and as what my general blog description says, this is a view and perspective of a junior police official. Additionally, the figures I am about to present are sourced openly from social media and though credibility is vetted, I can’t vouch that these will be the final figures considering that the said proposal is yet to be approved and passed into law by the Congress. (But mind you, the lower house has already declared their full support on this, so I’m assuming that the proposed bill will be approved) Also, I’ll be using a lot of graphs to help you visualize the content of this article and to better show the comparisons shown.

So to start with, I will present a table of the base pay increase for military and uniformed personnel:

For reference, please view the photo below:

Figure 1.2 – These photos were taken online, but the author has a good reason and source that this will be the contents of the proposed bill for the base pay increase. amp

PERCENTAGE INCREASE IS NOT 100% ON ALL RANKS

Yes! I guess you are all aware now that the 100% increase will only be implemented on the rank of PO1 or its equivalent in other services.

Presented with that facts, we can say that the percentage increase between the PNCOs and PCOs as the ranks goes higher is inversely proportional, with the PNCOs having a decreasing trend while the PCOs has an increasing trend. This is shown in the graph below:

Figure 1.3 – a line graph showing the distribution of percentage increase in relation to the base pay of the corresponding rank.

As you can see in the above graph, the ranks with the most increase in terms of percentage are those on the leftmost and rightmost, while the ranks in the middle of the hierarchy are left with lesser percentage increase.

ACTUAL AMOUNT TO BE ADDED ON BASE PAY

But to consider the percentage increase alone in the discussion is only half of the story. You see, we also need to see the actual amount that will be added to the current base pay. Below, it is clear what will be the corresponding increase in pesos, when the percentage increase is applied. As shown in the graph below, there is a great disparity in how much each rank will receive. However, do note that what is shown is the base pay only. later on, we will also take into considerations the other receivables.

Figure 1.4 – a bar graph showing the actual amount to be added to the current base pay after the percentage of increase is applied.

Figure 1.5 – a comparison of your current base pay vis a vis the proposed base pay that will supposedly be implemented in January 2018. amp

We can note that the base pay of PNCOs are almost level in the new proposal while the PCOs was able to maintain a steady ladderized base pay. In comparison, the old (or rather, current) base pay system is really ladderized from the bottom rank up with an even difference. While the new, proposed base pay system has an unequal base pay difference. Personally, I believe that an equal difference is logical. I hope somebody can give me an acceptable argument and logic why this proposed increase is much better. I am not talking about the actual increase itself but the differences in the amount of increase and the reason why some ranks received a larger amount compared to the other ranks.


Below, a graph showing the Proposed Base Pay, broken into 2 pieces: the blue bar shows the Current Base Pay while the red bar stacked above the blue bar is the Actual Amount to be Added to the current base pay when the proposed increase is implemented. 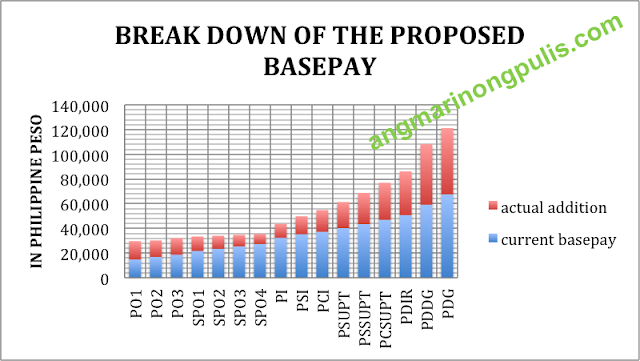 Figure 1.6 – Shown above is the Proposed Base Pay, broken into 2 pieces: the blue bar shows the Current Base Pay while the red bar stacked above the blue bar is the Actual Amount to be Added to the current base pay when the proposed increase is implemented.

WHAT ARE THE HIGHLIGHTS OF THIS BASE PAY INCREASE

1. The 100% increase in Base Pay will only apply to PO1s who will receive Php 29,668.00 from the present Php 14,834;
2. The Average increase across all ranks is 58.70%;
3. The Provisional Allowance, Officers’ Allowance and the increased Hazard Pay under E.O. 201 series of 2012 will be discontinued;
4. The Hazard Pay will be pegged at the existing rate of Php 540.00 per month;
5. The Pension Indexation will be suspended for this increase, meaning, the Pension of our retirees will not increase; and
6. The Implementation of this Increase will be in January 2018.

We are reserving out opinion and comments on the next parts of this series. For now, internalize how this increase will be implemented.

Next for this series, Other Pay, Bonuses, and Benefits. Also, we will compare the Net Take Home Pay (NTHP) of this Proposed increase vis a vis the NTHP under the E.O. 201 series of 2012.

My previous article about this salary increase was more of a forecast, which turn out to be probably true. Click this to go to that article.

Marinong Pulis
This blog is an attempt by the author to create an alter-ego that is not bound by rank, hierarchy or politics. One that does not represent his personal character but rather shall remain as an identity purely found online.
http://www.angmarinongpulis.com

GOOD NEWS! The DBM recently released the guidelines on the grant of Productive Enhancement Incentive (PEI). Under Budget Circular 2017-4, all qualified government employees will receive PEI of PhP 5,000 not earlier than December 15, 2017. An estimated amount of PhP 7.5 billion has been set aside in the 2017 Budget to finance the PEI […]

A lot of questions and unsolicited comments would arise every time an off-duty police officer takes out his service firearm to respond or react to a potentially dangerous situation. (Take the example of the PO3 Taytayon incident). Some say that PNP personnel are prohibited from carrying their FAs when not in uniform. Others defended the PNP […]

Upon instructions of Police General Archie Francisco F Gamboa, the Philippine National Police is now fast-tracking the smooth release of funds allocated for the hazard pay of police personnel who are rendering their duties as frontliners of the Enhance Community Quarantine. The PNP Directorate for Comptrollership bared that a uniform rate of Php 235.00 per […]

This may interest you

Omar Maute, Isnilon Hapilon Dead and Why it is the only good thing to do for Philippine Gov’t

How to Apply for a PSSLAI Loan Online: Step by Step Guide

Balabac: The town that was once a country

You have successfully subscribed to the newsletter

There was an error while trying to send your request. Please try again.